Skip to content
HomeStepping Out of my Comfort Zone for Ag

As most of you know, I was a featured speaker at the Living with Wildlife conference in Lewistown last week. The conference was sponsored by National Geographic, and hosted by American Prairie Reserve. 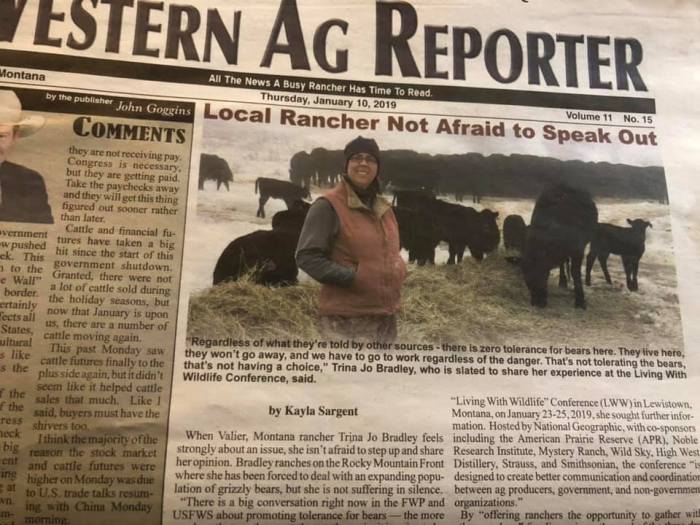 Several people warned me against going, as they figured it was just a “dog and pony show” put on by the APR to gain public favor and sway people to their way of thinking. Several other people told me that boycotting the conference would send a message that ranchers do not approve of the APR trying to tell us how to live.
While I agreed with the first statement, I wanted to make sure that everyone that attended the conference got the whole story, regardless of their background. I also encouraged ranchers to attend, as they needed to hear what I had to tell them, as well as hearing what all the other speakers had to say so they would know exactly where everyone is coming from. Plus, there was actually a lot of GOOD information at this conference, regardless of who was hosting it.
I showed up Wednesday afternoon not knowing what to expect. Before the conference began, I had a meeting with Kyran Kunkel, Director of Wildlife Restoration and Science at APR. He and I had a great conversation about living with predators, especially bears, and what I wanted to accomplish at this conference. I set aside my feelings for APR and talked to him as a PERSON. I don’t agree with APR, AT ALL. I think what they’re doing is horrible. But I was his guest, and I wanted to make sure he knew how I felt about bears and why I wanted to speak at the conference.
The conference kicked off Thursday morning with a welcome address by Chris Johns, former editor of National Geographic magazine. Chris talked a good game – he talked about how passionate he is about keeping families on the land that they’ve ranched for hundreds of years, and how they SO want to find a way for people and wildlife – especially predators – to live in harmony. Seems encouraging until you remember he’s a big supporter of APR, which is literally working to remove every ranching family from their land in central Montana to open a wildlife refuge.
The first presentation Thursday morning was “Conflict Reduction Practices,” which was the typical stuff you would expect to hear at an environmental conference. After that was “Economics of Living with Wildlife.” Speakers included Curt Freese, independent researcher and ecologist (read: friend of APR); Zach Jones, Yellowstone Grassfed (APR funded); Janna Long, Wild Sky (APR funded); Walker Milhoan, Ranchlogs and Ann Kolthoff, Strauss (partners with APR).
Curt Freese was the first one to really make my blood boil as he walked everyone through his presentation on why people should allow wildlife to come and go as they please, and how we should stop breaking up land for farming because the wildlife needs that ground more than we do.
My question to him was this, “You say farmers are destroying wildlife habitat, but farmers are also feeding the world’s population. People can’t eat conservation easements, so what do you propose we do? If all the farmers and ranchers quit, we’d have a plethora of wildlife, but no food.”
His response? (I’m paraphrasing here) “Do you know how many millions of pounds of food are wasted by people every year? Farmers don’t need to produce so much food. People just need to waste less.”
Solid argument, right? WRONG. Farmers have absolutely nothing to do with how much food people waste every year, and they shouldn’t be punished for it.
The next speaker was Janna Long from Wild Sky, an APR program that pays ranchers a premium for being “wildlife friendly,” as well as asking ranchers to hang game cameras around their property to capture photos of bears and wolves, which APR pays them for as well.
My question to Janna was a simple one, “Hasn’t ranching always been wildlife friendly? So isn’t labeling beef ‘Wild Sky’ like labeling water as gluten-free?”
Strangely, she didn’t have much of an answer for me.

When the conference broke for lunch, I had several people compliment me on my questions and challenges for the speakers. I had even more people from “the other side” come tell me I had a point about all ranchers being wildlife friendly, and they’d never thought of it like that before. Now, I’m sure that doesn’t mean they’re going to jump ship on their beliefs that wildlife have more rights than people, but they heard my message and they considered it, and I count that as a step in the right direction.
After lunch, I was a featured speaker on the panel entitled, “Conflict Prevention Tools for Living with Predators,” along with Daniel Kinka, APR; Jay Shepard, Washington Wildlife Biologist; Eric Graham, Blackfoot Challenge; Kim Johnston, People & Carnivores; and Ty Smucker, MTFWP Wolf Biologist.
After all the introductions were made and presentations given, we took questions from the audience. Almost every question was directed at me – to the point of embarrassment. But, without me there, they wouldn’t have heard how conflicts really happen, and how close these bears come to our homes, and how we have to be vigilant every second of every day.
Most of the questions were legit concerns or curiosity, but I was kind of attacked by one gentleman in the crowd that wanted to know exactly how many calves I lost every year to bears, and I kept telling him “I don’t know.” He just kept asking, and I just kept answering the same way. Thankfully, Ty Smucker spoke up and told him asking me that question was the same as asking me how many cows I have – and that is none of his business. I understand that he was probably trying to make a point that bears aren’t as big of a problem as sickness, or whatever, but my point was that death by bear is not a loss that ranchers should have to expect, regardless of whether I lose two calves or 200.
Again, I had several people approach me afterwards to either ask more questions, tell me about their own experiences, or thank me for being there to speak up for ranchers and farmers.
The second panel I sat on was “Living with Bears.” Also on the panel were Kim Johnston, People & Carnivores; Russ Talmo, Defenders of Wildlife; Eric Graham, Blackfoot Challenge; Malou Anderson, Tom Miner Basin Association; Rae Wynn-Grant, National Geographic; and Jeff Bectell and Andrea Morehouse, Waterton Biosphere Reserve.
For this presentation, I made it personal with photos of my family and many examples of grizzlies around farmyards and houses, places they really shouldn’t be comfortable.
Again, we had a good discussion about levels of tolerance, appropriate bear habitat, and Rocky Mountain Front rancher Steve Skelton gave a great example of how he worked together with MTFWP and Defenders of Wildlife to put up a night pen for his sheep so his guard dogs could have a bit of a break.
I can’t speak for the other sessions, since I obviously couldn’t attend, but I honestly thought the two I participated in were awesome. Great questions, great discussion, and I think everyone walked away with some new information.
Personally, I’m really glad I stepped out of my comfort zone to speak at the Living with Wildlife conference. It is going to take a massive effort from both sides to get these bears delisted and managed more appropriately, and if we never extend that olive branch and make the offer of meeting in the middle, how will we ever get there? I’m not saying we need to buy into everything these NGOs have to say, or form partnerships with them any chance we get, but some of our goals are the same, and there is strength in numbers. Let’s get the bears delisted and state managed before they take over every piece of private land in Montana.

The Mission of the Montana CattleWomen is to support the livestock industry and its environment through communication, education, and legislative activities.